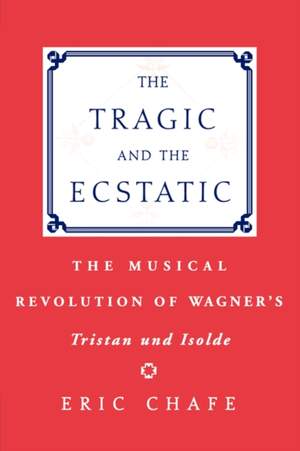 The Tragic and the Ecstatic: The Musical Revolution of Wagner's Tristan and Isolde

During the years preceding the composition of Tristan and Isolde, Wagner's aesthetics underwent a momentous turnaround, principally as a result of his discovery of Schopenhauer. Many of Schopenhauer's ideas, especially those regarding music's metaphysical significance, resonated with patterns of thought that had long been central to Wagner's aesthetics, and Wagner described the entry of Schopenhauer into his life as "a gift from heaven." Chafe argues that Wagner's Tristan and Isolde is a musical and dramatic exposition of metaphysical ideas inspired by Schopenhauer. The first part of the book covers the philosophical and literary underpinnings of the story, exploring Schopenhauer's metaphysics and Gottfried van Strassburg's Tristan poem. Chafe then turns to the events in the opera, providing tonal and harmonic analyses that reinforce his interpretation of the drama. Chafe acts as an expert guide, interpreting and illustrating most important moments for his reader. Ultimately, Chafe creates a critical account of Tristan, in which the drama is shown to develop through the music.