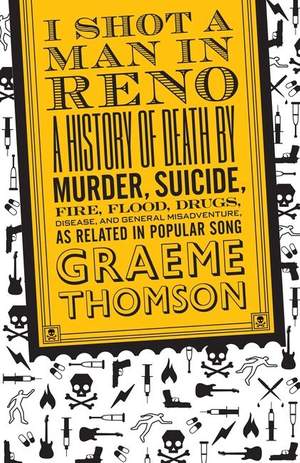 I Shot a Man in Reno: A History of Death by Murder, Suicide, Fire, Flood, Drugs, Disease and General Misadventure, as Related in Popular Song

Through brilliant prose and exhaustive research, [Thomson] presents a potted cultural history which argues that songs about death reveal just as much about how we live... In addition to his own... — Record Collector More…

"I Shot A Man In Reno" highlights the diversity of the audience that is touched by and attracted to music that embraces and acknowledges death, at the same time subverting the cliches.Ask the gangsta rap devotee. Ask the grizzled blues fanatic and the bearded folk fan. Ask the goth and the indie kid. Ask and they will all tell you the same thing: death and popular music have forever danced hand-in-hand in funereal waltz time. The pop charts and the majority of radio stations' playlists may conspire to convince anyone listening that the world spins on its axis to the tune of "I love you, you love me" and traditional matters of the heart. The rest of us know that we live in a world where red roses will one day become lilies and that death is the motor that drives the greatest and most exhilarating music of all.Drawing upon original and unique interviews with artists, such as Mick Jagger, Richard Thompson, Ice-T, Will Oldham and Neil Finn among many others, "I Shot a Man In Reno" explores how popular music deals with death, and how it documents the changing reality of what death means as one grows older. It's as transfixing as a train wreck, and you won't be able to put it down. As an epilogue, "I Shot A Man In Reno" presents the reader with the 50 greatest death songs of all time, complete with a brief rationale for each, acting as a primer for the morbidly curious listener.

Through brilliant prose and exhaustive research, [Thomson] presents a potted cultural history which argues that songs about death reveal just as much about how we live... In addition to his own articulate and persuasive thoughts, Thomson's interviews with top table musos such as Paul McCartney, Nick Cave, Richard Thompson and Neil Finn result in one of the most informative and fulfilling music books you're ever likely to read. An essential volume for anyone interested in pop as an all-pervasive social force that soundtracks our lives right up to our last breath