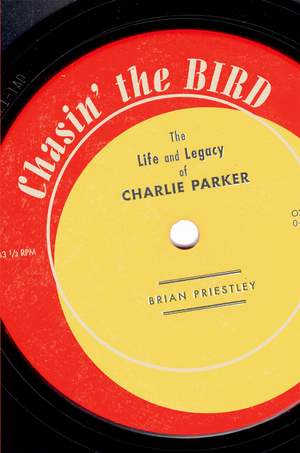 Chasin' The Bird: The Life and Legacy of Charlie Parker

Priestley's revised and updated biography...offers valuable insights to Bird's career, mainly because it is seen through the prism of his music.... This volume makes a valuable contribution to... — Downbeat More…

Charlie Parker has been idolized by generations of jazz musicians and fans. Indeed, his spectacular musical abilities-his blinding speed and brilliant improvisational style-made Parker a legend even before his tragic death at age thirty-four. Now, in Chasin' The Bird, Brian Priestley offers a marvelous biography of this jazz icon, ranging from his childhood in Kansas City to his final harrowing days in New York. Priestley offers new insight into Parker's career, beginning as a teenager single-mindedly devoted to mastering the saxophone. We follow Parker on his first trip to New York, penniless, washing dishes for $9.00 a week at Jimmy's Chicken Shack, a favorite hangout of the great Art Tatum, whose stunning speed and ingenuity were an influence on the young musician. Priestley sheds light on Parker's collaborations with other jazz legands, and illuminates such classic recordings as "Salt Peanuts," "A Night in Tunisia," and "Yardbird Suite"-music which defined an era. He also gives us an unflinching look at Parker's dark side-the drug abuse, heavy drinking, and tangled relations with women and the law. He recounts the death of Parker's daughter Pree at just two-and-a-half years old, and Parker's own death at thirty-four, in such wretched condition that the doctor listed his age as fifty-three. With an invaluable discography that lists every recording of Charlie Parker that has ever been made publicly available, this is a must-have biography of a true jazz giant, one that helps us penetrate the dazzling surface to grasp the artistry beneath.

Priestley's revised and updated biography...offers valuable insights to Bird's career, mainly because it is seen through the prism of his music.... This volume makes a valuable contribution to jazz literature.... A useful addition to the Parker library