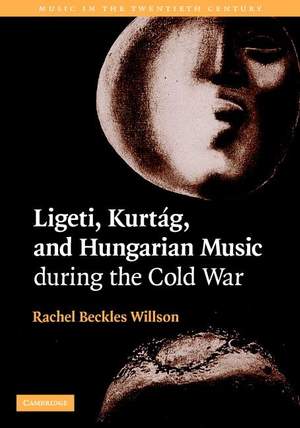 Ligeti, Kurtág, and Hungarian Music during the Cold War

Drawing on key elements from musical thought in inter-war Hungary, this 2007 book provides a unique perspective on the nation's musical heritage both inside and outside Hungary's borders during the Cold War. Although Ligeti became part of the Western avant-garde after he left Hungary in 1956, archival sources illuminate his ongoing contact with Hungarian musicians, and their shifting perspective on his work. Kurtág's music was more obviously involved with Hungarian traditions, was entangled with the Soviet occupation, and was a contributing part of the city's diverse musical culture. However, from the mid-1960s onwards, critics identified his music as an artistic and moral 'truth' distinct from the broader musical life of Budapest: it was an idealized symbol of life beyond the everyday in Hungary. Grounding her interpretations of works in these complex political circumstances, Beckles Willson is nonetheless sympathetic to arguments by Ligeti, Kurtág and Budapest music critics that their music might have a life beyond nationalist and Cold War ideology.