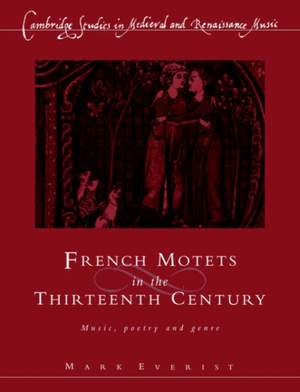 French Motets in the Thirteenth Century

This is the first full-length study of the vernacular motet in thirteenth-century France. The motet was the most prestigious type of music of that period, filling a gap between the music of the so-called Notre-Dame School and the Ars Nova of the early fourteenth century. This book takes the music and the poetry of the motet as its starting-point and attempts to come to grips with the ways in which musicians and poets treated pre-existing material, creating new artefacts. The book reviews the processes of texting and retexting, and the procedures for imparting structure to the works; it considers the way we conceive genre in the thirteenth-century motet, and supplements these with principles derived from twentieth-century genre theory. The motet is viewed as the interaction of literary and musical modes whose relationships give meaning to individual musical compositions.