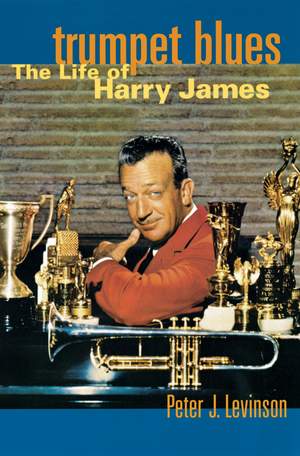 Swing is back in style, and with it a renewed interest in the Big Band Era. And few players dominated that era more than Harry James, whose soaring trumpet solos and romantic hit tunes influenced popular music for a generation. Now, Peter J. Levinson, who knew Harry James personally, has written a revealing biography of this jazz icon, based on nearly 200 interviews with musicians and friends. Harry James led a truly colorful life, and in Trumpet Blues Levinson captures it all. Beginning with James's childhood in a traveling circus, we follow the young trumpeter's meteoric rise in the 1930s and witness his electrifying performances with the Benny Goodman Orchestra. We see how James formed his own band in 1939, an incubator for many pop music stars of the 1940s and '50s, including Frank Sinatra, Connie Haines, Dick Haymes, Helen Forrest, and Kitty Kallen. Combined with James's superb musicianship, peerless trumpet technique and talented sidemen, this stellar group dominated the war years and the immediate post-war period. And James himself, especially after his marriage to film goddess Betty Grable, became one of America's most famous personalities and lived like true Hollywood royalty. Levinson describes their twenty-two-year marriage with insight and sympathy. But he shows how James's marriage-and his triumphant late-1950s comeback in Nevada's casinos-were slowly undermined by his penchant for compulsive gambling, womanizing, and alcoholism. He gives us the inside story of James's sybaritic lifestyle, and probes the profound psychological reasons for James's destructive behavior. The first biography ever written on Harry James, Trumpet Blues is a scintillating portrait of Swing's brightest star-his life, his loves, and the music that defined an era.