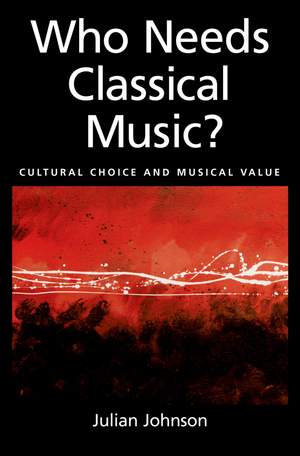 There is much to admire and provoke in this book ... it warrants serious engagement ... Read it and discuss the issues it raises as widely as possible because it offers the opportunity for serious... — Popular Music More…

During the last several decades, most cultural critics have come to agree that the division between 'high' and 'low' art is an artificial one, that Beethoven's Ninth and 'Blue Suede Shoes' are equally valuable as cultural texts. In Who Needs Classical Music?, Julian Johnson challenges these dominant assumptions about the relativism of cultural judgements. The author maintains that music is more than just 'a matter of taste': while some music provides entertainment, or serves as background noise, other music functions as art. This book considers the value of classical music in contemporary society, arguing that it remains distinctive because it works in quite different ways than most of the other music that surrounds us. In this long essay, Johnson aims to restore classical music's intrinsic aesthetic value and to rescue it from a designation as mere signifier of elitism or refinement. Who Needs Classical Music? is certain to spark debate among cultural critics and have important repercussions for arts policy.

There is much to admire and provoke in this book ... it warrants serious engagement ... Read it and discuss the issues it raises as widely as possible because it offers the opportunity for serious debate about music and its relationship to the way we live our lives