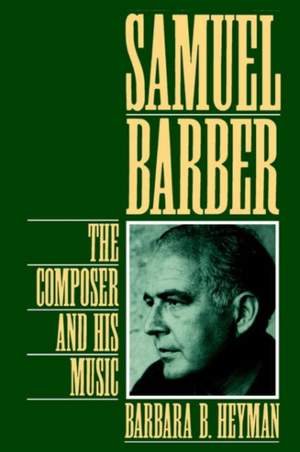 Samuel Barber: The Composer and His Music

Samuel Barber (1910-1981) was one of the most important and honoured American composers of the twentieth century. Writing in a great variety of musical forms - symphonies, concertos, operas, vocal music, chamber music - he infused his works with poetic lyricism and gave tonal language and forms new vitality. His rich legacy includes such famous compositions as the Adagio for Strings, the orchestral song Knoxville: Summer of 1915, three concertos, and his two operas, the Pulitzer Prize-winning Vanessa and Antony and Cleopatra, a commissioned work that opened the new Metropolitan Opera House at Lincoln Center. Generously documented by letters, sketchbooks, original musical manuscripts, and interviews with friends, colleagues and performers with whom he worked, this is the first book to cover Barber's entire career and all of his compositions. The biographical material on Barber is closely interspersed with a discussion of his music, displaying Barber's creative processes at work from his early student compositions to his mature masterpieces. Heyman also provides the social context in which this major composer grew: his education, how he built his career, the evolving musical tastes of American audiences, his relationship to musical giants like Serge Koussevitzky, and the role of radio in the promotion of his music. A testament to the significance of the new Romanticism, Samuel Barber stands as a model biography of an important American musical figure.

provides and authoritative commentary on this most European of American composers