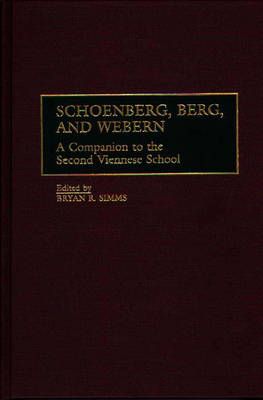 Schoenberg, Berg, and Webern: A Companion to the Second Viennese School

Schoenberg, Berg, and Webern, modern composers living in Vienna near the turn of the 20th century, are examined in a broad artistic context illustrating how their works grew from earlier Viennese musical developments. Presenting a coherent analysis of a central school of modern musical composition, the essays compare the artists' music to that in the nonmusical arts in Vienna at the time. A prominent musical phenomenon during the period, the Second Viennese School of Music would exert a profound impact on European and American composers in the decades following World War II. The recent discoveries and critical perspectives on the composers discussed in these essays detail new information on central aspects of their work, including the origins of atonal composition, the 12-tone method, and the literary models that often inspired their works. Coherent and current, this collection of essays offers unique insight into the personalities and artistic accomplishments of these three major figures who intoduced modernism to music.

Contributing to the continuing fascination with the modern culture produced in Vienna and other European cities near the turn of the century, these clear, accessible writings on the Second Viennese School will appeal to musicians and scholars alike. Each chapter, written by a different specialist, focuses on the artistic milieu of these three composers, avoiding a particular hypothesis and offering instead a broad, multifaceted discussion. This selection of new knowledge about aspects of the composers' work complements the valuable information also detailed about their music.