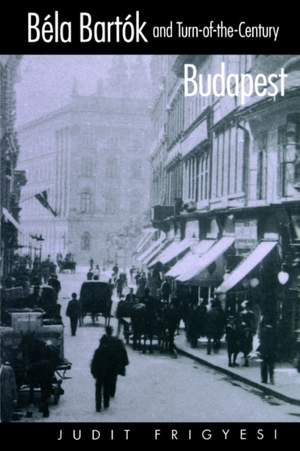 Frigyesi's work is a tour-de-force that in a single volume attempts (and to this reviewer's mind largely succeeds) to present the frame of mind and character of a whole generation of Hungarians... — Washington Times More…

Bartok's music is greatly prized by concertgoers, yet we know little about the intellectual milieu that gave rise to his artistry. Bartok is often seen as a lonely genius emerging from a gray background of an 'underdeveloped country.' Now Judit Frigyesi offers a broader perspective on Bartok's art by grounding it in the social and cultural life of turn-of-the-century Hungary and the intense creativity of its modernist movement. Bartok spent most of his life in Budapest, an exceptional man living in a remarkable milieu. Frigyesi argues that Hungarian modernism in general and Bartok's aesthetic in particular should be understood in terms of a collective search for wholeness in life and art and for a definition of identity in a rapidly changing world. Is it still possible, Bartok's generation of artists asked, to create coherent art in a world that is no longer whole? Bartok and others were preoccupied with this question and developed their aesthetics in response to it. In a discussion of Bartok and of Endre Ady, the most influential Hungarian poet of the time, Frigyesi demonstrates how different branches of art and different personalities responded to the same set of problems, creating oeuvres that appear as reflections of one another. She also examines Bartok's Bluebeard's Castle, exploring philosophical and poetic ideas of Hungarian modernism and linking Bartok's stylistic innovations to these concepts.

Frigyesi's work is a tour-de-force that in a single volume attempts (and to this reviewer's mind largely succeeds) to present the frame of mind and character of a whole generation of Hungarians that included the now internationally known composer Bela Bartok as well as the literary critic George Lukacs, the great Hungarian poet Endre Ady and many others