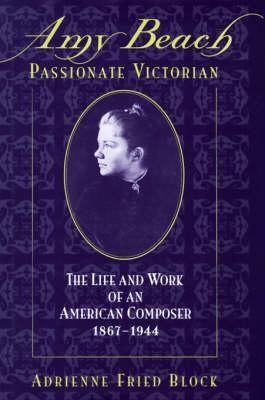 Amy Beach, Passionate Victorian: The Life and Work of an American Composer, 1867-1944

Amy Marcy Cheney Beach (1867-1944), the most widely performed composer of her generation, was the first American woman to succeed as a creator of large-scale art music. Her "Gaelic" Symphony, given its premiere by the Boston Symphony Orchestra in 1896, was the first work of its kind by an American woman to be performed by an American orchestra. Almost all of her more than 300 works were published soon after they were composed and performed, and today her music is finding new advocates and audiences for its energy, intensity, and sheer beauty. Yet, until now, no full-length critical biography of Beach's life or comprehensive critical overview of her music existed. This biography admirably fills that gap, fully examining the connections between Beach's life and work in light of social currents and dominant ideologies. Born into a musical family in Victorian times, Amy Beach started composing as a child of four and was equally gifted as a pianist. Her talent was recognized early by Boston's leading musicians, who gave her unqualified support. Although Beach believed that the life of a professional musician was the only life for her, her parents had raised her for marriage and a career of amateur music-making. Her response to this parental (and later spousal) opposition was to find creative ways of reaching her goal without direct confrontation. Discouraged from a full-scale concert career, she instead found her metier in composition. Success as a composer of art songs came early for Beach: indeed, her songs outsold those of her contemporaries. Nevertheless, she was determined to separate her work from the genteel parlor music women were writing in her day by creating large-scale works-a Mass, a symphony, and chamber music-that challenged the accepted notion that women were incapable of creating high art. She won the respect of colleagues and the allegiance of audiences. Many who praised her work, however, considered her an exception among women. Beach's reaction to this was to join with other women composers of serious music by promoting their works along with her own. Adrienne Fried Block has written a biography that takes full account of issues of gender and musical modernism, considering Beach in the contexts of her time and of her composer contemporaries, both male and female. Amy Beach, Passionate Victorian will be of great interest to students and scholars of American music, and to music lovers in general.

Amy Beach, passionate Victorian is attractively produced as well as being eminently readable in a homely American style