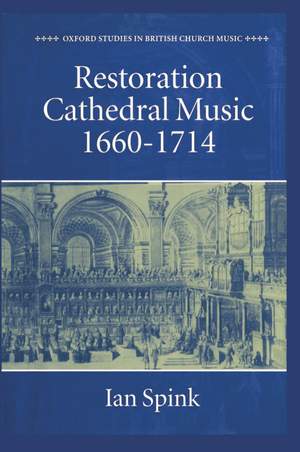 It is hardly too fanciful to liken opening this book to lifting the lid of an unsuspected treasure chest...an immensely readable, uniquely definitive text that any musical scholar working in... — Choir & Organ More…

The Restoration of Charles II stimulated one of the greatest triumphs of Anglican cathedral music. A group of gifted men, led by Henry Purcell, succeeded in transforming the carefully preserved and revived traditions of the Golden Age of Tudor and earlier Stuart periods into a contemporary style that vigorously embraces the idioms of the French and Italian Baroque. But although perhaps a dozen masterpieces of the period remain in the cathedral repertory, few of us can have had any idea of the riches and variety of music awaiting rediscovery. Ian Spink, a leading authority on seventeenth-century English music, has carried out a remarkable new investigation of the musical sources of the period and of the archives of every cathedral and choral foundation. The result is not only a largely unfamiliar picture of the musical life and circumstance of choral foundations, from the Chapel Royal to remote Carlisle, but also a fresh assessment of the music taking in not only the work of the great men of the age - Purcell, Locke, Handel - but also many lesser masters such as Humfrey, Blow, Clarke, Weldon, and Croft. For the first time, perhaps, the true character and shape of the Restoration period of musical history is revealed.

It is hardly too fanciful to liken opening this book to lifting the lid of an unsuspected treasure chest...an immensely readable, uniquely definitive text that any musical scholar working in this field would surely have pledged his birthright to have written