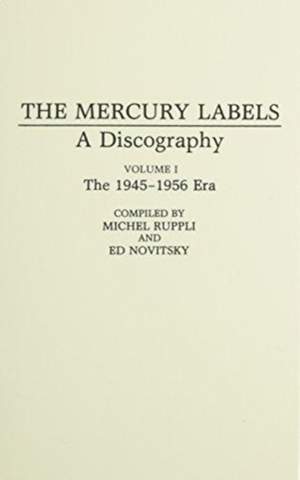 The number and variety of research projects this kind of information might inspire and support is astonishing: this reviewer hopes scholars will make use of this carefully laid groundwork. Music... — Choice More…

Mercury Records was founded in 1945 and soon became a major force in jazz and blues, classical, rock, and country recording. This five-volume discography provides a listing of all recordings made or issued by the Mercury label and its subsidiaries (Blue Rock, Cumberland, Emarcy, Fontana, Limelight, Philips, Smash, and Wing) as well as leased and purchased materials and recordings by independent labels distributed by Mercury.

Much of the discography is devoted to recording session listings, which include details on personnel, recording dates, and master and issue numbers. Each volume ends with an artist index, which includes all the names appearing in the session listings of the volume. In addition to providing details on stereo/mono master number equivalences, and information on various formats, the fifth volume concludes with a general artist index, including all the names which appear in the earlier volumes. This discography is invaluable to all who seek details on the music and artists recorded in the second half of the twentieth century.

The number and variety of research projects this kind of information might inspire and support is astonishing: this reviewer hopes scholars will make use of this carefully laid groundwork. Music collections at the upper-division undergraduate level and above