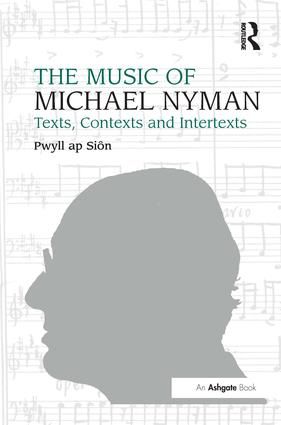 The Music of Michael Nyman: Texts, Contexts and Intertexts

[a] ground-breaking study ... it represents a substantial contribution to musicology ... the study succeeds in its illustration of the subtlety and sophistication of Nyman's art of reworking.... — Music and Letters More…

Nyman's rise to international prominence during the last three decades has made him one of the world's most successful living composers. His music has nevertheless been criticized for its parasitic borrowing of other composers' ideas and for its relentless self-borrowing. In this first book-length study in English, Pwyll ap SiAn places Nyman's writings within the general context of Anglo-American experimentalism, minimalism and post-minimalism, and provides a series of useful contexts from which controversial aspects of Nyman's musical language can be more clearly understood and appreciated. Drawing upon terms informed by intertextual theory in general, appropriation and borrowing are first introduced within the context of twentieth-century art music and theory. Intertextual concepts are explained and their terms defined before Nyman's musical language is considered in relation to a series of intertextual classifications and types. These types then form the basis of a more in-depth study of his works during the second half of the book, ranging from opera and chamber music to film. Rather than restricting style and technique, Nyman's intertextual approach, on the contrary, is shown to provide his music with an almost infinite amount of variety, flexibility and diversity, and this has been used to illustrate a wide range of technical, aesthetic and expressive forms. He composes with his ear towards the past as if it were a rich quarry to mine, working like a musical archaeologist, uncovering artefacts and chiselling fresh and vibrant sonic edifices out of them.

[a] ground-breaking study ... it represents a substantial contribution to musicology ... the study succeeds in its illustration of the subtlety and sophistication of Nyman's art of reworking. It also illuminates intertextuality, a topic as relevant to currents in postmodern music as it is to compositional strategies stretching back centuries across musical history