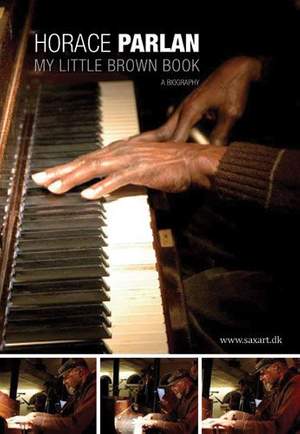 Horace Parlan - My Little Brown Book - A biography by Hans Barfod . Pianist Horace Parlan was born on January 19, 1931 and adopted when three months old. His father was a minister and his mother cleaned house for wealthy families. At the age of five, the right side of Parlan's body was paralyzed from polio. At an early age he developed an interest in jazz music and began playing piano, which also to some degree helped rehabilitate his semi-paralyzed right hand. He studied law, but the music won, and he switched to the Pittsburgh Music Institute. He played around Pittsburgh until 1957, performing with the Turrentine brothers among others. Charles Mingus invited him to join his group. 1957-72 Parlan was based in New York, playing with Mingus (1957-59), Lou Donaldson (1960) and Johnny Griffin/Eddie "Lockjaw" Davis Quintet (1961-62). 1962-66 Parlan played with multi-instrumentalist Roland Kirk's group, while also fronting his own trio and recording trio, quartet, quintet and sextet LPs for the legendary Blue Note label. During the same period he recorded as a sideman with Dexter Gordon, Booker Ervin, Stanley Turrentine, Babs Gonzales and others. During his years in New York, Horace Parlan played with just about everybody in the be-bop generation. In 1972 Parlan decided to move to Europe. He made Denmark his home, and has toured most of the world with leading American and European musicians. Parlan has recorded numerous LPs and CDs as a bandleader and with saxophonist Archie Shepp, trumpeter Clark Terry, bassist Red Mitchell, cornettist Thad Jones, trumpeter and vocalist Chet Baker and many more. The limited use of his right hand helped Horace Parlan develop the bluesy style that has made him one of the finest accompanists in modern jazz. He has evolved a special talent for acclimatizing to the different styles of various vocalists and musicians. Horace's best recorded work includes the large volume of LPs for Blue Note 1960-64, two duo CDs with Archie Shepp from 1978 and '81, and his solo CD from 1999, Voyage of Discovery. Horace Parlan received the Ben Webster Prize in 2000 DVD portrait by Don McGlynn: Horace Parlan on Horace Parlan (1999) For further info, please visit www.saxart.dk