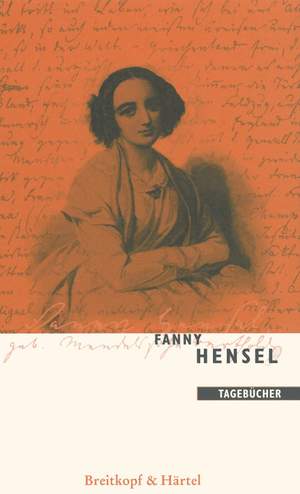 "... since my Trio I have not written one usable measure", thus end Fanny Hensel's Diaries on 26 April 1847. However, one begins to admire the dazzlingly cultivated musician from the very first page. With her many interests - which included politics and technological achievements - Fanny Hensel self-assuredly held her own within the Mendelssohn family. With a clear mind and a sharp pen, she described everyday life in Berlin and blossomed whenever she could flee the provincial narrowness. Her observations from France and Italy belong to the most impressive sections of her diaries, which she did not keep with regularity.
Worthy of the greatest praise are the editors Rudolf Elvers and Hans-Günter Klein, who have succeeded in painstakingly collecting the widely dispersed manuscripts. Supplied with brillant comments, illustrations, a family tree and an vaste index, the diaries of Fanny Hensel are an eminently readable contribution to the history - both musical and social - of the first half of the 19th century.

This edition has been awarded the German Music Edition Prize 2003.